Driving to the ATL

On April 18, 2017 I was officially diagnosed with Eosinophilic Esophagitis (EoE). To say it has been a long road would be an understatement.  When my gastroenterologist said the words, “You have EoE. How did you guess that’s what you have?”  JJ sat speechless in his chair beside me as her words enveloped the room. I burst out in tears. I couldn’t hold the frayed seams together anymore. Finally, a name for the pain, the suffering, the heartache. FINALLY.

Unfortunately, diagnosis is only a small first step in a long process toward healing and remission. After getting diagnosed I made an appointment with an allergist to confirm through testing that I don’t have any traditional allergies. I’m one of the blessed patients that doesn’t have any IgE allergies on top of EoE. An IgE allergy is an immediate allergic reaction, such as breaking out in hives, wheezing, experiencing stomach distress, and at its worst, anaphylaxis. EoE is a delayed allergic response that causes swelling in your esophagus. So often I would say to JJ “I think my throat is closing” and his response would be: “How could your throat be closing? You’re talking!” With EoE my esophagus is spasming open and shut, but it’s not the part of my throat that controls breathing or talking. EoE is often referred to as “asthma or eczema of the esophagus.” This disorder isn’t life threatening, so you’ll live. You’ll just wish you were dead. Better, right? Bear with me and my sarcasm.

Even though I don’t have any traditional food allergies, it doesn’t mean I’m home-free. This is where this disorder gets really fun. You get checked for IgE allergies, but they don’t really play a part in EoE symptoms. EoE is a delayed reaction and most allergy tests look for an immediate reaction. The only way to find out what foods might be triggering EoE episodes is through an elimination diet. The first step is eliminating all common allergens from your diet for 6-8 weeks.

At the beginning of May I said so long to seafood, peanuts and tree nuts, eggs, soy, gluten, and dairy! I just hit the 6 week mark, which means I can start adding them back into my diet one group at a time every two weeks. By doing that I can monitor if my symptoms get worse. I also decided to meet with a nutritionist and get tested for food sensitivities.

Food sensitivity testing is very different from allergy testing. One of the big differences is insurance doesn’t cover it. Major bummer. The other main difference is sensitivity testing looks more at what is causing inflammation in your body, not what is causing an IgE allergic reaction. It’s a helpful test for EoE for that very reason. If you suffer from unexplained migraines, IBS, Fibromyalgia, or a host of other inflammatory illnesses, you should look into the MRT LEAP 150 test.

The LEAP 150 test tests 150 food items and food chemicals. Everyone’s results are different because it is based on your body’s chemistry. Red items are your most reactive foods and chemicals. Basically, these are the items your body hates the most. Yellow ones are moderately reactive. These usually depend on how much you are consuming in your diet, so you have to be careful not to eat them too much or too often. Green ones mean your body has no inflammatory reaction, so these will make up your diet entirely for the next 3-6 months. This way your body can begin to heal and recover.

Here are my results: 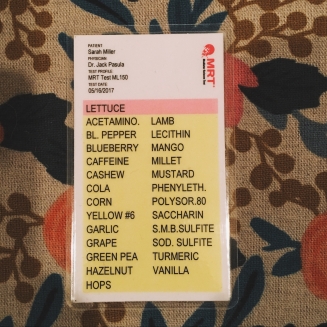 Lettuce was a shocker. I thought lettuce was supposed to be the healthiest food you could eat on the planet. Apparently, not for my weirdo body. Also, I never knew how much corn is literally in everything. It’s like the ninja of vegetables. Crouching Cornstarch Hidden Corn!! It hides in the oddest of places like toothpaste and even bottled water! In the end I could write an ode proclaiming my love to most of these foods and food chemicals, but I will spare myself the embarrassment. Let’s just say I thought we were friends, and they turned out to be foes in disguise. Very Katy Perry and Taylor Swift dynamic. 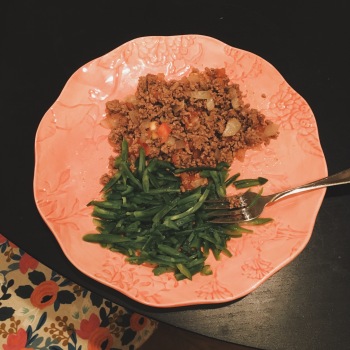 I just finished Phase 1 of the Diet and have moved on to Phase 2. There are 5 Phases. I start by eating my lowest reactive green foods, and each phase bring more foods into my diet again. I have to keep away from all my yellow foods for at least 3 months, and my one red food for 6 months. I’m keeping a food journal to keep track of how my body responds in each phase.  The most boring food journal on the planet. Somewhere Tom Haverford is whining.

Having to cut these foods out over the last 2 weeks has been tough. I have lost what little was left of my sanity at times. My 30th birthday sucked! I cried most of the day. If I wrote a book about this process, it would be called, “And Then I Cried.” Yet, I have seen real results since following the MRT results. Zero migraines and my EoE episodes have been less frequent. My trips to the bathroom have been way less eventful (TMI…). Also, reoccurring neck and joint pain have minimized to almost nothing. Since January I have lost 40 pounds. Mostly because of how sick I got at the beginning of this year (I wasn’t able to eat much), and then the diet definitely kept the weight loss ball rolling.  It’s crazy how much damage food can do when it doesn’t agree with your body. I’m taking it day by day. One bowl of gluten-free, sugar-free, flavor-free oatmeal at a time.